The rise and rise of the podcast

So, this week on the blog we’re going to look at the insatiable appetite that people now have for podcasts and some of the reasons why.

Podcasting actually came into being around 15 years ago, when Adam Curry and Dave Winer wrote a program that enabled them to automatically download internet radio broadcasts to their ipod.

There were then some wilderness years where people suddenly thought that the next big thing might not actually be the next big thing…Then in 2014 a wildly popular podcast was released called Serial. A high-school senior named Hae Min Lee disappeared one day after school in 1999, in Baltimore County, 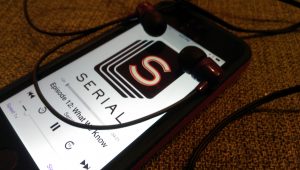 Maryland. A month later, her body was found in a city park. She’d been strangled. Her 17-year-old ex-boyfriend, Adnan Syed, was arrested for the crime, and within a year, he was sentenced to life in prison. The case against him was largely based on the story of one witness, Adnan’s friend Jay, who testified that he helped Adnan bury Hae’s body. But Adnan has always maintained he had nothing to do with Hae’s death. Some people believe he’s telling the truth. Many others don’t.

The makers of this podcast – the team also behind ‘This American Life’ – have often been attributed with the resurgence in this form of media – especially when discussing Serial.
And it is often the explosion of high-quality content such as Serial, with producers creating more engaging and polished shows, which is slated as the number one factor in this resurgence. It is also as cheap as chips to get into it! With audio equipment prices falling like a stone, any old mug can start their own show… Not to make disparaging comments on that basis; in fact some of the most popular shows in the world are recorded and edited on inexpensive equipment in the hosts homes, making the medium incredibly accessible.

This accessibility also means that sub-cultures can have their slice of the media pie far more easily – people who are underrepresented in standard media can easily have their say and their community can easily and cheaply listen.

It is also and advertisers dream – as millions of us have adopted listening to podcasts, advertisers have responded and taken note. The spoken word creates a highly engaged audience, and people are really loyal to their podcast hosts – if Ira Glass tells me to buy a Dell laptop, I’ll buy a Dell laptop. So, more advertising money flows in, bigger budgets are there to be spent, better content to be made and the circle of life continues.

So, where is it likely to go from here? Well, paywall and subscription models are being tried out as we speak – again, the hope is if we can increase the monetization of this, then we can create better content – in fact Rory McIlroy of the golf world is currently involved in a subscription podcast with a view to giving an insight into the inner workings of life as one of the worlds premier golfers. To each their own.

About Babble
We love voices and we love what we do. Since we opened our doors in 2007, bringing fresh talent to an ever-expanding industry, we’ve supplied voiceover artists to clients across the world, on commercials, animation, video games… you name it, one of our VOs has done it. Why should you choose us? With over 30 years experience across the commercial and production industry, we’d like to think we know our stuff, and will use that knowledge to make your life easier. We listen to your casting, production and budgetary needs and supply you with the best voice for the job. Babble – top talent, sounding great.