Rather tragically (I suppose dependant on how you see it…) Summer is nearly over… and Autumn is nearly upon us. So, we need to start thinking about curling up in front of a fire with a box set, switching on the Xbox or maybe even braving the cold and heading to the theatre. 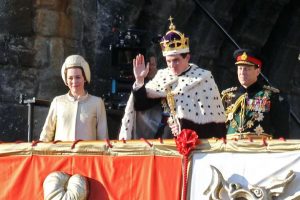 If you want to catch some of our Babblers doing their day job check out some of these:

Fans of The Crown can catch Sam Phillips as the Queen’s equerry, ‘Steven’. If you haven’t watched the Crown up until now, binge watch over on Netflix – you won’t regret it, it’s won all of those Emmys for a reason!

Pippa Evans is hosting a ‘one night only’ called ‘Parts I’ll Never Play’ at the Other Palace on the 26th September – get your tickets here!

Ian Conningham will be in A Confession on ITV which starts on Monday 2nd September – This is Martin Freeman’s 1st stab at a Sherlock style whodunnit on his own (based on a real life events no less!)

Alex Gaumond will star as Carl in the first UK Tour of ‘WHAT’S IN A NAME?’ which starts touring on the 5th September and is visiting various cities around the UK until November – For tickets and more information visit: whatsinanameplay.com

Tamsin Carroll is in Peer Gynt at the National, now playing until the 8th October. This outrageous modern myth is designed by the Tony award-winning Richard Hudson (The Lion King), with an original score from Paul Englishby (BBC’s Luther and Dr Foster) and movement direction from Polly Bennett (Bohemian Rhapsody). Tickets can be bought here!

Tim Chipping is going to be in Liar – Just when it looked like serial rapist Andrew Earlham was headed for prison, Liar delivered one final surprise in the last moments of its finale.

Percelle Ascott will have The Innocents S2 coming out. Watch this space for confirmed release dates. The show follows teenagers June (Sorcha Groundsell) and Harry (Percelle Ascott) as they run away from their homes to be together, only to discover that June is a shapeshifter and there’s an enigmatic scientist called Halvorson (Guy Pearce) looking to reunite her with her mother.

Joivan Wade will be back in Doom Patrol, finally! The little superhero show that could now has…coulded? At DC Universe’s SDCC 2019 panel, the streaming service confirmed that it has renewed Doom Patrol for season 2.

About Babble
We love voices and we love what we do. Since we opened our doors in 2007, bringing fresh talent to an ever-expanding industry, we’ve supplied voiceover artists to clients  across the world, on commercials, animation, video games… you name it, one of our VOs has done it. Why should you choose us? With over 30 years experience across the commercial and production industry, we’d like to think we know our stuff, and will use that knowledge to make your life easier. We listen to your casting, production and budgetary needs and supply you with the best voice for the job. Babble – top talent, sounding great.